As we are digging up into flow management during the Logistics class, I wondered myself about events that required a really complex organization and planning.

I’ve been to a lot of concerts, conferences, festivals… But nothing as big as the World Cup. And as it was a successful edition for the French Nation, I’ve decided to analyze the logistics that it needed.

All this article explanations are going to be based on this official document, presented by a Honorary Professor of the Federal Institute of Technology of Lausanne, Philippe H. Bovy, as part of a training seminar for the organization of the event.

The World Cup of Football, in term of visibility and attractibility, is comparable to the Olimpic Games. However, as there isn’t enough football stadiums in ONE city, it’s mandatory to host this event in different cities. In average, every World Cup is hosted in 10/12 cities, hence create issues about mass transportation and hosting. Fans from all around the world are going to follow their teams and therefore will need to move from one city to another. This involves in particular:

Hence, the World Cup Council decided to cut down into 4 levels of transportation :

This have to take into account that the visitors (the football fans) would travel next to the inhabitants of Russia : the solution was to distinguish them by giving them a Fan ID,  that would allow them to travel more easily around the country.

As discussed before, this event gather a high number of people at a specific time; but this one is not predictable. In order to face those periods of large affluence, the committee developed the host city mobility plan. 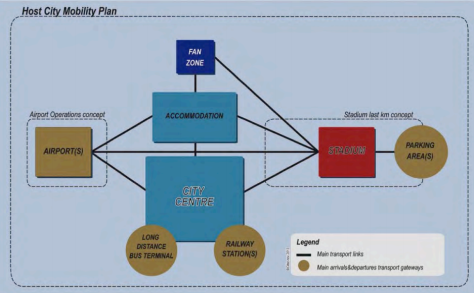 Indeed, the “Fan Zone” (zone designed to host the fans and in particular display the games on large screens – which can lead to a large affluence), the city center and the stadium receive large human flows, and especially in the “stadium last km concept”.

The Football World Cup is, due to its decentralized aspect, organized and managed by different entities :

Therefore, it is necessary to define which is going to be in charge of the different transportation phase and management, to ensure the good execution and transition of the fans through the event. Here was the matrix that have been designed :

We can clearly see that from the home country’s fan to the stadium, 3 different entities are in charge of the transportation logistics, even though those 3 entities are working all together every time.

The Russian World Cup have faced a lot of difficulties, especially by taking a lot of delay in the construction of stadiums. There are a lot of controversy in those events as they involve a high amount of work in extremely dangerous conditions, especially during the organisation of the 2014 World Cup in Brazil, where a lot of riots occurred. However, the international promotion that the event releases seems to take advantage on all the other aspects, and countries are putting a lot of effort (and money..) into the organization of this event, even if this not make sense (the next World Cup in 2022 will be hosted by Qatar, in highly air-conditioned stadiums, that are built only for the event…).