“Extreme engineering” is a documentary television series that explain futuristic and ongoing engineering projects. One of the best chapters shows how to solve the problem of transporting mega-structures to different locations. Do you need to carry a giant ship, or maybe 22 of them? The solution of your problems is The Blue Marlin ship.

The Blue Marlin does not lose its time carrying containers, oil or fishes. Instead, it can carry other ships, nuclear-powered submarines or oil rigs. This amazing vessel, commonly known as “flo/flo” (float on – float off), is a semi-submerging ship capable of carrying other ships out of the water. One part of the ship can disappear up to 13 meters below the water’s surface. For doing that, its ballast tanks are filled with water. Then, when the cargo is into position, the tanks are pumped out until the deck is in contact with the load. 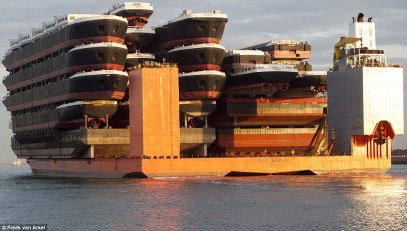 The blue Marin is property of Dockwise, a Dutch shipping company and has been used for different purposes. As a matter of fact, it was sent for transporting the damaged USS Cole from Yemen to United States. Its biggest cargo was a BP oil rig (60,000 metric tons), which was carried from Korea to the Gulf of Mexico.

The Blue Marin is 217 meters long and it is powered by a 17,000 horsepower diesel engine. However, it seems small in comparison to a new one that was built in 2012 by the same company; the Vanguard. While the Blue Marin can carry 76,000 metric tons structures, this new ship (275 meters long) is able to transport up to 110,000 metric tons. In addition, The Vanguard includes movable casings, which facilitates adapting the vessel to different loads.

The following video shows how the Vanguard works: